Board meeting at 8 a.m. and you were working on the deck ‘til 1. Kids begging for a beach day but you’re struggling to get off the couch. Building a company, raising a family, being a good partner, boss, and friend — yep, today’s another big day doing it all.

You reach for something — anything — to kick you into high gear. But is all energy created equal? According to Dr. Hector Lopez, Lifeforce’s Chief Research & Innovation Advisor and world expert in dietary supplement formulation and safety, not necessarily. Although energy itself involves several complex physiological interactions, we can measure its real-world effects through things like decision making, speed of processing information, working memory, and reaction time, Dr. Lopez says. And using observational studies we can compare how those abilities change with different levels of a particular ingredient in the body.

So if we know what optimal energy looks like, then why are we still reaching for crash-and-burn caffeine fixes? Enter: Peak Rise™, a premium, clinician-grade matrix of active ingredients designed to help you reach your peak state, and keep you there. 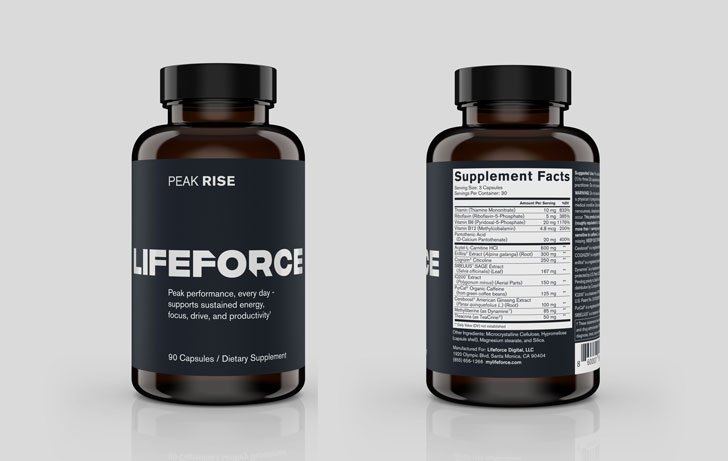 The power of Peak Rise™ starts with Dynamine™ and TeaCrine®, the brand names for the alkaloids methylliberine and theacrine. They’re like ‘cousins’ to caffeine and ‘siblings’ to one another, meaning they have very similar structures that influence receptors in the brain, but also bring unique attributes that go beyond caffeine, Dr. Lopez says.

Put simply, “they help to diminish sensations of fatigue, while improving alertness, focus, sustained attention, and reaction time or processing speed,” Dr. Lopez says. They’re also formulated to improve motivation and mood. And, methylliberine and theacrine are both found in a variety of plant sources, Dr. Lopez adds, including Camellia assamica-Kucha, a kind of tea, as well as cupuaçu, a fruit related to cocoa from Brazil, and other coffee and tea varieties.

Dynamine™ and TeaCrine® are beneficial on their own — but research tells us they’re even better in combination with caffeine, Dr. Lopez says. In a clinical trial, TeaCrine® and Dynamine™ together increased the half-life of caffeine by approximately 300%. Translation: The two chemical compounds may allow you to use less caffeine and still capture the benefits. Plus, Dynamine™ and TeaCrine® appear to impact neurotransmitters that balance out some of the undesirable side effects that can come with caffeine, like irritability and jitteriness, Dr. Lopez notes. “I sometimes describe it as you get to take off the way you do with caffeine, but you are much more in control of the steering, accelerator, and brakes with a very smooth landing on the other side, as opposed to just crashing,” Dr. Lopez explains.

Keeping Your Head in the Game

Peak Rise™’s benefits go beyond energy supply to also boost daily cognitive function, even improving primary, secondary, and working memory within 1 hour of use. That’s critical during midlife when brain circulation, blood flow and neuron performance begin to decline, says Dr. Lopez. In a study of 22 people, adding Dynamine™ and TeaCrine® to coffee elevated measures of cognitive performance like speed, precision, accuracy, reaction time, and even people’s self perception of how productive they would be for the rest of the day. No more dragging your feet to get out the door in the morning.

And the above-the-neck benefits don’t stop there. Rounding out Peak Rise™’s high-impact, clinically-studied ingredients are Cereboost®, a potent ginseng extract, and Cognizin®, a clinically tested form of CDP-choline that is a precursor to acetylcholine, a naturally occurring brain chemical, both of which support healthy brain function. One study from 2019 examined the effect of CDP-choline supplementation on young men. After four weeks, those who’d received Cognizin® demonstrated better attention as well as psychomotor speed. Another from 2021 looked at how CDP-choline impacts elderly adults with age-associated memory challenges, and found that 12 weeks of supplementation improved memory performance.

You can rest — and rise — easy knowing that all of the ingredients in Peak Rise™ are included at clinically validated doses. Many competitors in the energy and productivity space take a kitchen sink approach, including dozens of ingredients at small doses. “That’s a bit like knowing that aspirin is effective, but then only taking a fraction of a tablet and wondering why you still have a headache,” says Lifeforce Co-Founder Dugal Bain.

Peak Rise™, for example, boasts clinically proven doses of TeaCrineⓇ, Dynamine, Cognizin® and EnXtra® at 50 mg, 85 mg, 250 mg, and 300 mg, whereas similar products on the market only include 25 mg, 50 mg, 100-150 mg, and 150-200 mg, respectively. This highly curated approach to ingredients also means you can say goodbye to swallowing a mound of tablets every morning.

So, before you reach for that second (or third) cup of coffee, consider reaching for Peak Rise™ instead.

Get primed for your morning and maintain peak performance all day long. This premium-grade formula extends the duration of caffeine by up to three times, keeping you energized, focused, and alert without any jitters or mid-afternoon crash. When mental performance is critical, Peak Rise™ enhances how efficiently neurotransmitters signal to key neurons in the brain, boosting your mood, memory, drive, and mental stamina. Combines 14 high-dosage ingredients including 7 patented, clinically tested compounds like TeaCrine® and Dynamine™, Cognizin®, and Cereboost®.

Get the best rest and wake up refreshed. This sophisticated formula works overtime to relieve stress, rejuvenate your brain, and optimize your circadian rhythm for deep, uninterrupted sleep. With a unique blend of ingredients including CLOCK®, Venetron®, and Zylaria™, Peak Rest™ works at the deepest levels of brain recovery and whole-body relaxation, so you wake up feeling energized, alert, and ready to take on the day at your peak.

Get primed for your morning and maintain peak performance all day long. This premium-grade formula extends the duration of caffeine by up to three times, keeping you energized, focused, and alert without any jitters or mid-afternoon crash. When mental performance is critical, Peak Rise™ enhances how efficiently neurotransmitters signal to key neurons in the brain, boosting your mood, memory, drive, and mental stamina. Combines 14 high-dosage ingredients including 7 patented, clinically tested compounds like TeaCrine® and Dynamine™, Cognizin®, and Cereboost®.